Calvin R. Stone, Sportsman, Conservationist, One of the Founders of the Everglades Conservation and Sportsman's Club, Author of "Forty Years In The Everglades" and one of the instrumental people in lobbying for the legislation forming the Big Cypress Nation Preserve.

In Calvin Stone's book is a chapter titled "Calusa Camp". In this chapter he describes how he and his family built this camp, starting at the end of the 1950's. Those of us that have camps know the effort it takes to build a camp structure in the middle of the swamp, far from any roads. From Calvin's book "Every time I went hunting I would haul some piece of equipment or a sack of supplies on my buggy. We hauled everything from lumber, bags of cement and aluminum roofing to stoves and refrigerators. We hauled material when it was hot and rainy and when it was cold and dry. I lost count of the number of trips. In addition, constructing the camp became quite a family affair. My wife Mary and our two daughters Harriett and Sandra and later the girls husbands worked as hard as I did on the camp." Calvin continues, " Since those first days there, we have cleared three acres, planted grass, fruit trees that grow limes, grapefruit, oranges, avocados, kumquats and mangoes. We have a little garden where we grow vegetables. The rest of the land is in its natural state." Calvin's final words about his camp, "All in all, Calusa Camp is almost like a little Garden of Eden.

Calvin, in the final years of his life, sold the camp to the Big Cypress National Preserve. The intention was that it would be used as an out back camp for the preserves uses. 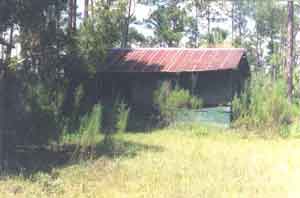 This is how the Big Cypress National Preserve custodianship looks. One of the first things the BCNP personnel did was cut down all of Calvin's fruit trees, so they could land their helicopter on the property. That was the last thing they cut. The lawn, which as camp owners know, serves as a fire break, has never been cut. The whole cleared three acres is overgrown with shoulder high weeds and a wild fire would over take the buildings in short order. Of course this may be the BCNP's intent. The building shown in the picture to the left, is Calvin's "Honeymoon Quarters", as he called it. The main sleeping quarters, was set up as a bunking area, able to sleep many people. In his later years Calvin used the "Honeymoon Quarters", for his wife and himself for a little privacy from the guests. These guests included, Florida's governor and other politicians, federal and state biologists, game commission people, family, friends and other sportsmen. Meetings were held at this camp to discuss the forming of the BCNP and management issues concerning it. 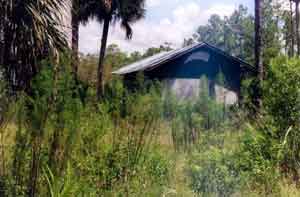 The picture to the right is Calvin's main sleeping quarters. This was the only sleeping quarters for most of the years of Calusa Camp. As you can see, the yard is overgrown, The BCNP has not done a lick of work to preserve the buildings. Not so much as one brush full of paint as been applied to keep the cabins from deteriorating. Even if this camp had no historical significance, I as a tax payer, would expect the BCNP to do enough maintenance to preserve the value of the tax dollars spent to purchase this facility. If you would visit this camp now you would see the doors hanging open, unpainted wood shutters hanging off the windows, a refrigerator sitting out in the yard rusting away. 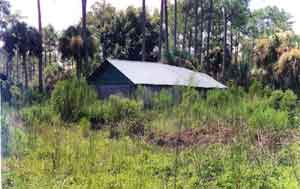 The Picture to the left is Calvin's kitchen and dining building. As the picture shows, the shoulder high weeds would bring a wild fire right up to the structure. The picture was taken from the area that used to contain the fruit trees. On the property is a big pile of junk. Any camp owner in the Big Cypress Swamp would be embarrassed to have the stuff in the junk pile on their property. It contains old engine parts, propane tanks, tires, cans, who knows what kind of contaminants. The only sign the BCNP personnel ever visit this place, is one solitary designated trail marker, driven into the ground at the front gate. Of course this must be a joke, because the BCNP personnel should never want people to pass by and see how they are treating "Camp Calusa". The BCNP fiscal year 2001 budget totals $5,245,000, wouldn't you think that a few dollars of it could be spent on maintenance of this BCNP property?

Click Here to See The Rest of The Story